I don’t usually write nerdy camera posts, preferring to concentrate on what I see. However, I’ve learned the hard way over the years that being able to focus on a good story in the field depends as much on how you prepare beforehand as it does on how the story unfolds in front of you.

In September of this year, I’d been asked by the Honnold Foundation to travel down to the northeastern part of the Ecuadorian Amazon to document the work of the Cofan people’s land patrol, ‘La Guardia’, set up to protect their forested and mountainous territory from incursions by illegal mining, fishing, and logging operations.

I knew I’d be bushwhacking through the humid Ecuadorian Amazon and scrambling on and off small canoes without a spare pair of hands and without frequent access to power. I’d be constantly trying to keep up with or get ahead of people for whom moving quickly through complicated terrain is second nature. Priorities for a shoot like this immediately center around weight, durability, and power consumption.

I picked my Sony a7siii for the job, a great camera with a small body size and low power consumption. But the build quality isn’t that of other brands, so to ensure it was protected and to allow the use of NDs and external power, I equipped it with SHAPE’s cage complete with a top handle, side handle, a follow focus and a bombproof clamp for a LAV receiver unit. While I could have in theory chosen to use a single circular variable ND to cut down on bulk and weight, I value the lightweight single tray matte box for two reasons: the quality of the ND filters one can use is vastly superior, and, maybe most importantly for wet environments, the matte box and the carbon fibre flag guarantees a dry front lens element in everything but driving rain!

In the case of that kind of rain or if sh*t hit the fan in any other way, I wanted something I didn’t have to worry about. A 1510 pelican case, though heavy, can be fit into a jury-rigged backpack and survive most eventualities that would leave me broken, including the very real risk of being dropped in an angry river.

I chose right. The journey to Sinangoe and up various rivers (in them, beside them and on them!) tested all of my gear close to breaking point. But it didn’t break, drown, or run out of power, thanks to the choices I made beforehand. During one particularly gruelling scramble along slippery cliffs above a wild river, I realized that one choice I’d made safeguarded my camera more than any other. Despite using the clip-on matte box, I’d left both 15mm rails on the camera, not just to attach the follow focus but also to act as a bumper of sorts and another handle for anyone to grab if necessary. During that slippery scramble, I was able to sling the camera on my back and when necessary pass it to members of our team without worrying that they’d be grabbing the wrong part of it and ripping something off by accident.

I guess the moral of this little story is that while attaching things to your camera to allow you to get the best image possible is always nice, be sure to start with the things that just allow the camera to survive the world you’re entering!

Dominic Gill, a former biologist, began his filmmaking career by selling his house, buying a bicycle and riding 20,000 miles from Alaska to Argentina. His subsequent film “Take A Seat” was released internationally in 2009 winning the Special Jury Prize at Banff Mountain Film Festival. Since then he has directed and DPed countless short films in the outdoor space and a small handful of features and television series. 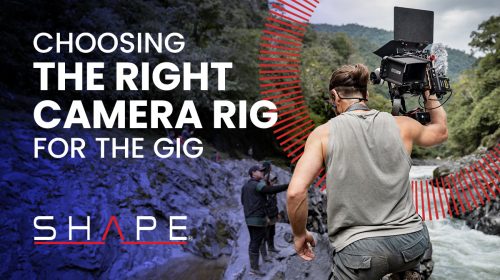 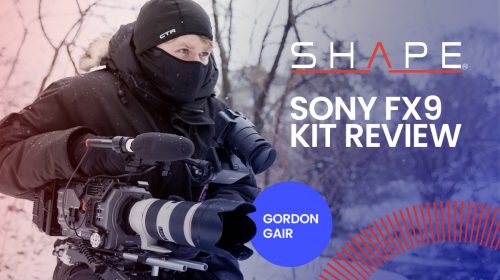 Review of the SHAPE kit for the Sony FX9

tell us why you would be a great team member